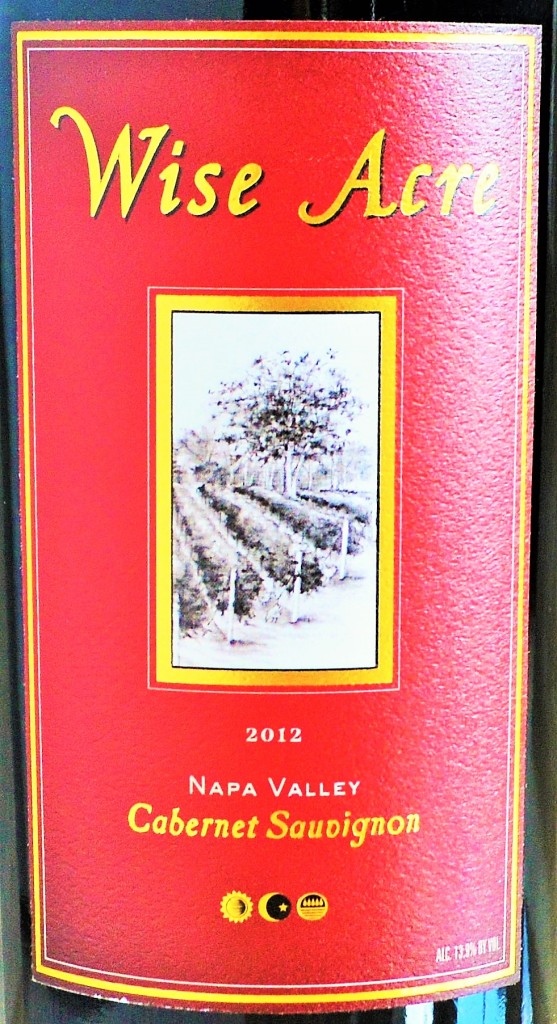 I believe there’s a lot of significance in a name, and in my opinion Wise Acre Vineyard couldn’t be a more appropriate namesake for what is arguably Napa Valley’s smallest commercial winery. Measuring in at a mere 1/2 acre, there isn’t much room for error, is there?

Proprietors Lynn and Kirk Grace couldn’t make a better team to serve as stewards of this site. Kirk has been farming vineyards in Napa Valley for over 30 years and is considered a pioneer of bio-dynamic farming. Lynn, who grew up in the vineyards of Rutherford, is a sort-of ‘vine whisperer’ who devotes considerable effort to the health of her Forward Gravelly-Aiken Loam soils and 4×4 spaced vines on her tiny, bio-dynamically farmed vineyard.

They purchased the property that would become Wise Acre in 2003, when it was just a meadow at an elevation of ~680 feet in the Deer Park section of Napa Valley. Then they went to work, with the goal of producing an estate-grown and bio-dynamically farmed Cabernet that would authentically express a true sense of place.

Wise Acre Vineyard during my visit in October, 2015

They chose to plant vines grafted to the Bosche Cabernet Sauvignon field selection from Grace Family Vineyards. Also used by Freemark Abbey and Hartwell Vineyards, they selected it for its balanced ripening characteristics and reputation for producing a more elegant style of Cabernet Sauvignon.

Their hands-on, intensive approach to farming involves precise pruning, tying, suckering and irrigation as need by each vine. Lynn Grace believes that “The essence of good farming is not farming the grapes, you’re farming the soils. You’re managing the grapes but you’re making sure your soil is as authentic as possible.” Their philosophy of clean, bio-correct farming is the wisest way to product the best wine – hence the name, Wise Acre. 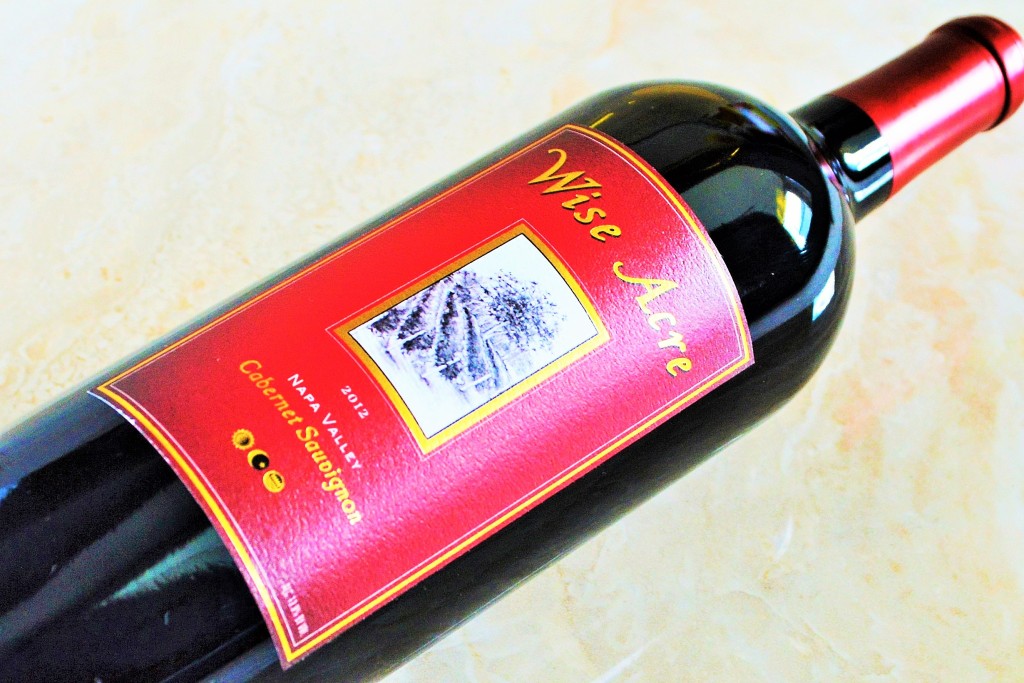 Appearance: Pours a medium-dark garnet in the glass.

Nose: The nose is quite aromatic and sweetly perfumed revealing violet, black cherry and mint aromas.

On the palate: The Wise Acre Cabernet Sauvignon 2012 is medium in body and seamlessly textured in the mouth. The core of black raspberry, black cherry, menthol and mint flavors are plush and harmonious. The wine is striking for it’s purity of dark red fruit and balance. It finishes with subtle spice, taut but supple tannin and a hint of lifting acidity.

Where to get it: Wise Acre Vineyard

Should you buy? If you’re looking for a top Cabernet that manages to be both expressive and impeccably balanced, the Wise Acre Cabernet Sauvignon is not to be overlooked. Unlike many of the extremely ripe Cabernet’s coming out of Napa, Wise Acre would complement rather than compete with a meal. 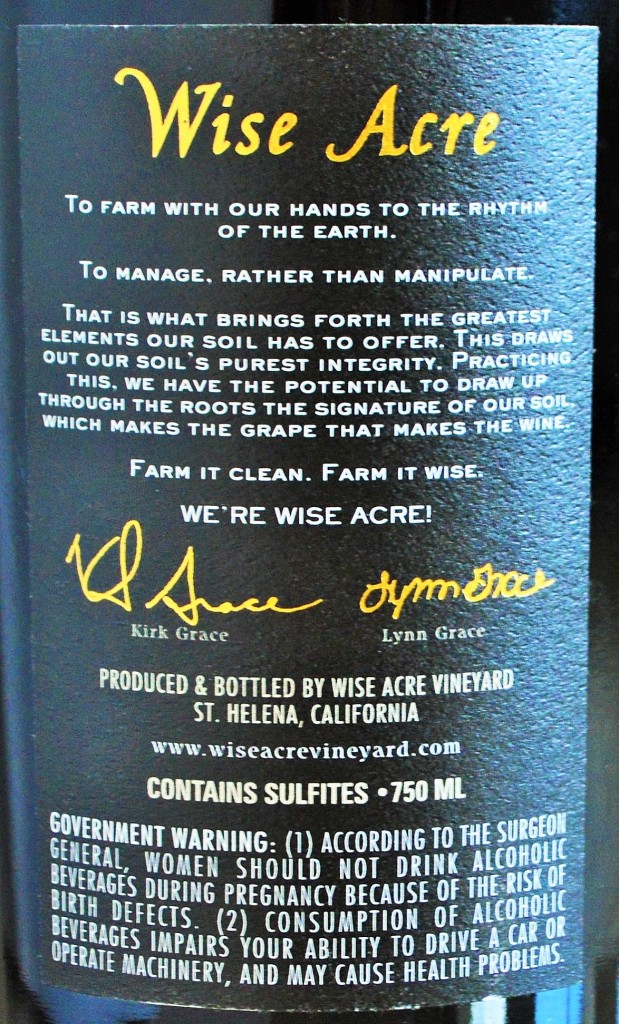 Should you find the proliferation of mass marketed, highly-manipulated grocery store wines offensive, you’re sure to find solace in a bottle of Wise Acre Cabernet. If the founders of the ‘farm-to-table’ movement served wine with dinner, it would probably be Wise Acre.

Sure, the wines are far from inexpensive. But when you consider the amount of care and soul that goes into each bottle of the very limited 70-150 case annual production, it quickly begins to seem more reasonable.

Lynn and Kirk’s farming philosophy directly contrasts to many top Cabernet producers, where vintners espouse the benefits of poor soils with high drainage. That approach emphasizes making a vine stress itself to find the nutrients it needs, resulting in tiny, intense fruit.

The goal at Wise Acre isn’t to produce the most concentrated or powerful wine, but one that manages both substance and finesse – produced from grapes grown in healthy, nutrient rich soils. The quality of the Wise Acre Cabernet Sauvignon 2012 validates their perspective on farming.

Lynn and Kirk Grace have succeeded in fashioning a distinctive wine that speaks to its sense of place, while respecting the soils and environment that produced it. And their success hasn’t gone unnoticed, with names like the Beverly Hills Hotel, Picasso at the Bellagio and Napa’s Press Restaurant now serving Wise Acre Cabernet on their exclusive wine lists. If you haven’t already, it might be wise to get your hands on some Wise Acre before it’s too late!

**Wine submitted as a media sample for purposed of review. No consideration was received for publishing this article.